Every White House watcher has noticed by now the close relationship between President Trump and his older daughter, Ivanka. Now that Ivanka Trump has an official position in the administration and an office in the West Wing, she is expected to become even more visible to the public. What will her role be? How will she and her father work together?

History buffs scurried around to find examples of other presidential daughters who played important roles in their father’s lives. The only daughter who took over the First Lady role was Martha Jefferson, who acted as hostess for her widower father. Ivanka Trump’s role in her father’s administration is going to be far different from that of the First Lady, Melania Trump. It looks as though this administration will be setting quite a few “firsts” for presidential families.

The story that got me started on this train of thought is the story of Galileo and his older daughter as told in Dava Sobel’s book Galileo’s Daughter. It gives an eye-opening glimpse into family life in the 17th century. Despite spending most of her life in a cloistered

convent, Maria Celeste kept up with her father’s scientific discoveries and with his life in the turbulent political currents of the day. Her letters deal primarily with the mundane details of clothing and food. Maria Celeste mended collars for her father, asked him to send her fabric to make a wedding present for her brother’s wife, and prepared potions to ease his chronic aches and pains. But she also consoled him when he was persistently questioned by the Inquisition and even managed his household, from behind her convent walls, when he was imprisoned for publishing his heretical ideas.

Galileo, for his part, patiently hunted down the fabrics and other household items Maria Celeste requested and generously supported her and her convent for many years. I had never known that the families of nuns were expected to give so generously to pay for the necessities of life in the convent—food, medical care,

and even building repairs. Without a husband and without any means of earning a living, women were dependent on the generosity of their fathers, brothers and other male relatives. This must have led to anger and bitterness in some families, but in the case of the Galileo family, father and daughter forged a relationship that was filled with love and that must have consoled each of them for the trials and difficulties of their lives during the upheavals of their time.

Galileo’s Daughter is a book well worth reading, especially 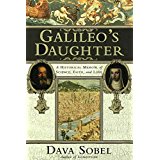 if you are a parent. You’ll learn a lot about science and perhaps even more about political and family relationships. Now that our society has moved far beyond the financial dependency of women, the dynamics of father-daughter relationships have changed, but these relationships are often stressful and difficult to maneuver. As the roles of both men and women continue to evolve, it is worth looking back sometimes on the ways families handled these challenges in the past.