Florence Nightingale’s struggle to build an independent life for herself took many years. Her mother and her sister couldn’t believe that she wanted to give up the social activities that went with upper class British life. Nonetheless, Florence managed to obtain training in nursing and when she was 32 years old she had the opportunity to become superintendent of the Institute for the Care of Sick Gentlewomen in London. For the first time she could move away from her family and start a life of her own, but the Institute did not give her scope for developing the talents that made her famous. The war in the Crimea which started in August 1854 was the catalyst that demonstrated Florence’s skills. 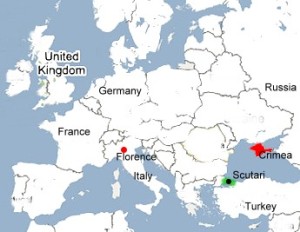 which was threatening to block their access to India. It wasn’t until British troops reached the Crimea that their vulnerability to the climate and poor sanitary conditions was demonstrated. Before the battles had started 20 percent of the troops had come down with diarrhea, cholera, or dysentery. Hospital facilities were poor or non-existent. At last Florence Nightingale had an arena in which her talents shone, but it was a difficult struggle to convince the authorities that she could help. Finally she was able to gather together a group of women who had some experience as nurses. They included lay nurses and both Roman Catholic and Anglican nuns. Florence left for the Crimea in October 1854 and established her headquarters in the hospital at Scutari. It was there that she proved her abilities as an executive, managing the delicate relationships between the army and the nurses, establishing methods of providing food and supplies for the hospital, and introducing sanitary measures that saved lives.

The press in England spread the word about what Florence’s nurses were accomplishing, although there was controversy over their roles. Some readers complained about the inclusion of Roman Catholic nuns in the group because they feared proselytizing, although almost a quarter of the troops were Irish Catholics. While she was in the Crimea, Florence’s fame as the “lady with the lamp” grew even though she did less and less nursing. She was essentially a manager and purveyor of supplies, but the public insisted upon viewing her as a gentle nurse who soothed poor, sick soldiers. The army officers and politicians who interacted with her were more realistic in describing her as a tough executive who fought to build a viable organization of hospitals.

While Florence continued her struggle to improve the health care given to British soldiers and to overcome the reluctance of Army officers to make changes, her reputation in England continued to grow. She was a national heroine. Several songs were written about her including the popular “Nightingale of the East”:

Now God sent this woman to succour the brave,

Some thousands she saved, from an untimely grave;

Her eyes beam with pleasure, she’s bounteous and good

The wants of the wounded, are by her understood.

With fever some brought in, with life almost gone.

Some with dismantled limbs, some to fragments are torn.

But they keep up their spirits, their hearts never fail.

Now they’re cheer’d by the presence of a sweet Nightingale.

We don’t know what Florence thought of this tribute, but it certainly set her firmly in the tradition of the bountiful woman overflowing with kindness and charity. That was the way her public wanted to think of her and of the other nurses. Once they returned from the Crimea they were expected to step back into their lives of homemaking and serving the weak and wounded.

When Florence returned to England in the summer of 1856, she had no intention of stepping back. The more she learned about health conditions among the troops, the more determined she became to change the situation. She pushed hard to get an official commission appointed and although she couldn’t serve on the commission herself, it was her persistence that eventually brought it about. She labored relentlessly to write a report, which she eventually published as Notes on Matters Affecting the Health, Efficiency, and Hospital Administration of the British Army. Founded Chiefly on the Experience of the Late War. 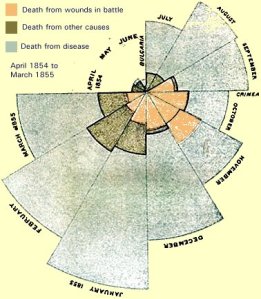 Here again her interest in statistics served her well. Realizing that people could visualize pictures better than rows of figures, she invented what she called her “coxcombs” to present the most important facts.

Florence Nightingale lived to be ninety years old and most of those years were devoted to improving public health. Like so many other women, her strengths have often been misunderstood. She is remembered as the sweet nurse tending soldiers, but her real achievement was far too “unwomanly” to be acknowledged while she was alive. It’s a shame that she is often misrepresented even now. There are several good biographies; one that I strongly recommend is Mark Bostridge’s recent Florence Nightingale: the Making of an Icon. After reading it you’ll never feel the same about Victorian women and their lives.

Those of us who watch Masterpiece Theatre on PBS have been treated this month to a new view of British life. Last year it was Downton Abbey that seized everyone’s imagination as we glimpsed the green lawns, spacious homes and lives of the wealthy, well-mannered women who lived there. Sure we saw the servants too, but even they spent their time in elegant surroundings. In the current series Call the Midwife we are introduced to the gray and grimy streets of East End London in the 1950s and to a group of women who spend their lives delivering babies in cluttered bedrooms. Women had to be tough to endure the endless hard work and discomfort of their lives, and that includes the midwives as well as the mothers. (Somehow the men in this series are all peripheral.) Even though the two dramas are separated by 40 years time, the class distinctions seem equally clear and jarring. It made me think of some of the heroines of England who have built bridges between classes, or at least made the attempt.

Florence Nightingale, the famous “Lady with the Lamp” who brought relief to suffering soldiers during the war in the Crimea and made nursing a respectable profession, is a familiar figure in 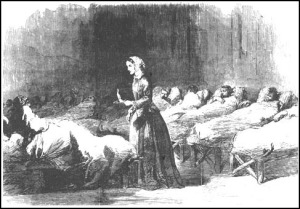 history books. The image of Florence going through the hospital wards suggests a sweet, kindly woman with a yearning to take care of people, but Florence wasn’t like that. She had a burning need to do something with her life and yet her parents and relatives seemed determined to thwart her. It was Florence’s misfortune to have been born to prosperous but unimaginative parents who could not see that she was miserable with the role women were expected to play.

Instead of finding pleasure in decorative needlework, Florence loved statistics—of all things. The 1830s and 1840s, when Florence was a young woman, were the years during which England started collecting statistics about births, marriages and deaths. For the first time the government and leaders throughout the country were able to get a picture of what was going in the lives of the lower classes. The collection of numbers—statistics—was a contentious subject. Goethe had commented “It has been said that figures rule the world. Maybe. But I am sure that figures show us whether it is being ruled well or badly.” Florence would agree with this, but other writers, like Charles Dickens, railed against the domination of facts and figures. In his book Hard Times, Dickens painted numbers and fact-based education for children as a false doctrine. His heroine Sissy, calls statistics “stutterings” and the author probably agreed with her. Dickens thought a worship of facts and numbers would stunt the imagination of children and spoil their lives.

Statistics did not spoil Florence’s life, although it would be many years before they became a powerful tool for her. I’ll continue the story of Florence Nightingale’s struggles in my next post.