Today we celebrate a holiday seldom marked these days. What with the Republican Convention poised to start whenever the threatening storm Isaac eases up, and Florida residents leaving their homes to escape the hurricane, there has been little notice of Women’s Equality Day. Why a holiday in August so close to Labor Day? Because it marks the anniversary of the day in 1920 when the 19th Amendment, giving women the vote, was signed into law. That date is important. It has revolutionized the way women live and operate in our society. And the date might not be remembered at all except for the work of a woman born in 1920 a month before the amendment was proclaimed. Her name was Bella Abzug.

For women living in New York and much of the rest of the country, Bella Abzug became a familiar figure during the 1970s when she was a Congresswoman from New York City. One of her many achievements was being the first Jewish woman elected to Congress. Bella Abzug was a figure made for the age of television. She had a distinctive look—she wore a broad-brimmed hat whenever she appeared in public—and a distinctive voice that was hard to ignore. The hats were the result of her 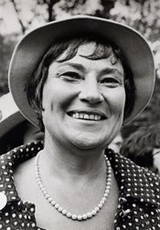 becoming a lawyer in the days when few women practiced law. She started wearing a hat in the office so people would not assume she was a secretary. It was a trademark and gave her more recognition than most other members of Congress.

Abzug was a labor lawyer who fought for the rights of unions, workers, and members of minority groups. In Congress she sponsored a bill for immediate withdrawal of troops from Vietnam War. It didn’t pass. She also called unsuccessfully for universal health care. Her crusades were often unsuccessful, but she cared deeply about politics and would not relinquish her insistence on fighting for what she thought was right even though she lost. She was a fighter and she raised issues that were unpopular in her day but have since been accepted.

In 1971 Bella Abzug achieved success with her bill to establish Women’s Equality Day on August 26. Congress passed the resolution she had introduced:

Joint Resolution of Congress, 1971[2] Designating August 26 of each year as Women’s Equality Day

WHEREAS, the women of the United States have united to assure that these rights and privileges are available to all citizens equally regardless of sex; [2]

WHEREAS, the women of the United States have designated August 26, the anniversary date of the passage of the Nineteenth Amendment, as symbol of the continued fight for equal rights: and [2]

WHEREAS, the women of United States are to be commended and supported in their organizations and activities, [2]

NOW, THEREFORE, BE IT RESOLVED, the Senate and House of Representatives of the United States of America in Congress assembled, that August 26 of each year is designated as “Women’s Equality Day,” and the President is authorized and requested to issue a proclamation annually in commemoration of that day in 1920, on which the women of America were first given the right to vote, and that day in 1970, on which a nationwide demonstration for women’s rights took place

So now on this quiet weekend before Labor Day let’s remember Bella Abzug and the other courageous women who fought so hard to give women the freedom to vote and to influence political life. We have all benefitted from their work.

The recent death of Helen Gurley Brown, the longtime editor of Cosmopolitan magazine calls to mind the scope and influence of earlier women editors in America. The appointment of Brown as editor of a traditional women’s magazine in 1962 shook the publishing world. Her emphasis on the acceptance of the right of single women to have sex was a bombshell in many conventional suburban communities. I remember as a young mother living in a sprawling housing development in New Jersey the startled reaction of some of my neighbors. One morning I saw a woman down my street sitting on her steps crying because she worried about her husband being seduced by secretaries made daring by Cosmopolitan. Within a few years the domestic life of many women was being reshaped by the bold ideas implanted by Helen Gurley Brown and her magazine.

Long before Brown, however, women editors had shaped the lives and expectations of American women. Sarah J. Hale, who for forty years ruled over Godey’s Lady’s Book, one of the country’s most influential magazines, had a different agenda for her journal. Instead of seeing sexual freedom as the most important empowerment tool for women, Hale crusaded for education. Offering young women an education similar to their brothers was a radical idea. She strongly supported economic independence for woman and wanted them to become teachers and doctors to serve both the community and their families. Unlike Brown, Hale never saw the role of women as extending far beyond the family circle. She wanted women to use their new strength and independence to educate their children and serve their husbands. She never thought of herself as a feminist, but her influence on women’s lives went far beyond what she intended. By supporting and publicizing the founding of Vassar College, she opened the door for girls to leave home to study and work independently of their families.

Education for women wasn’t the only cause Hale worked on. She also created Thanksgiving as a national holiday rather than the quiet New England celebration it had been when she was young. After a long campaign, she persuaded Abraham Lincoln to proclaim the first national Thanksgiving holiday in 1863. Perhaps her work on this had a more lasting effect than any other single goal she pursued. Just think of the millions of dollars spent every year on advertising and merchandizing food and decorations for Thanksgiving celebrations.

Journalists who pull together the work of others to create a magazine, newspaper, or perhaps a television program are often underrated as thought leaders, but many of them have a greater effect on society than the “great books” that cause a stir. It’s the inexorable repetition of a periodical that gradually shapes our ideas far more than one book read during a few days. Perhaps we’ll never know how much Helen Gurley Brown of Sarah J. Hale changed women’s lives, but let’s take at least a few minutes to honor their memories.

What is it about being in a history-laden building or viewing ancient art in a museum that fills us with a sense of wonder? A few weeks ago I was in Paris and visited several of the great museums there. Walking through the 15th century mansion that houses the Musee Cluny, the museum of medieval art, it was impossible not to feel a sense of mystery and wonder. The serene faces of the many images of the Virgin Mary were more calming than a dozen tranquillizers. 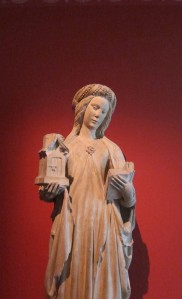 Yet the medieval period was not was serene. Life was harsh and brutal. Peasants suffered through their short lives, prey to hunger, poverty, and the cruelty of aristocrats. But somehow in their art, they showed a promise of what life, or perhaps heaven, could be like. And all these centuries later those faces still fascinate us with a vision of peace and serenity.

It is not only the religious figures in the Cluny that give us a sense of continuity and achievement. I found it touching to see this sun dial carved into the wall of the building. Somehow a dial that has tracked the movement of the shadows in this courtyard for more than 300 years speaks to me of how people’s greatest ideas can survive. We have no idea of who first set this dial on the wall, but his work (and it probably was a man who did it) has helped generations of people mark the time through their days.

Of course Cluny is not the only museum in Paris that gives us a restorative glimpse of the past. The lovely (and almost never crowded) Musee Guimet with its collection of Asian Art has the West’s largest collection of ancient Cambodian sculpture as well as pieces from Japan, China, Nepal and India.

This wooden Buddha  embodies the very idea of peace and disengagement from the trivial cares of the day.

Visiting a city with a long record of its historic past is quite a change for someone who lives in the today-focused culture of California. It is another reminder of how much we need to hold onto our collective past, to think about it, read about it and if possible visit it. We can find a perspective which is not so easy to find in the clutter of media that fills our lives. 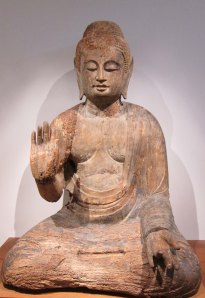