Those of us who live in California are always conscious of the threat of earthquakes. It is not that we walk around in fear, but the idea that one could occur is always lurking in the back of our minds. And now comes the massive 7.8 earthquake in Nepal! The pictures of crumpled buildings and of people camping out on the street are a vivid reminder of what can

happen. All the threats of crime and terrorism pale beside the scope of what natural forces can bring about. But through the centuries people have  had a hard time accepting the ideas that our lives, hopes and dreams can be overturned merely by natural forces that are not directed at us. As I read the news reports I started wondering when people began to acknowledge how little control we humans have over nature and began reading about earthquakes.

The Lisbon quake, more than 250 years ago was a kind of turning point in how Europeans and Americans viewed the causes of natural disasters. When the earth shook and Lisbon, the magnificent capital city of Portugal, started falling in ruins, the attention of the world was captured. The Lisbon quake was probably the first worldwide—or at least European-wide global calamity. Earlier disasters, from the volcano at Pompeii to the Great London fire, had been of interest mostly within the country or region where they occurred. But by 1755, Europeans had become internationalized. They traded with other countries, exchanged ambassadors, and understood that disasters could spread damage from one country to another. What people could not understand, or didn’t want to understand, was that they had no control over these destructive forces.

The first reaction among many people was to blame Lisbon itself for the tragedy. If only people had led virtuous lives, God would not have punished them by sending an earthquake. John Wesley, the English Methodist preacher wrote:

Woe! To the Men on Earth who dwell,

When God doth all his Wrath reveal,

And showers his Judgments down!

A century or two earlier the religious reaction might have been accepted and prayer and fasting become the only solution to the damage, but by the 18th century, philosophers had begun to ask other questions. Perhaps God wasn’t regulating everything that happened on earth. Perhaps there were forces that could not be controlled by prayer and repentance. Thoughtful men and women became divided on the causes and appropriate responses to unforeseen events. For the first time a number of governments throughout Europe began sending aid and supplies to Lisbon rather than just advice about purifying the city. George II of England encouraged the House of Commons to send 100,000 pounds to “send such speedy and effectual relief, as may be suitable to so affecting and pressing an exigency.” It was the beginning of international disaster aid which has since become such an important part of the world scene.

Portugal was lucky to find a leader, the Marquis de Pombal, who brought order to the city and supervised its reconstruction. One of his most surprising innovations was to send out a questionnaire asking people to tell the government exactly what they had seen and experienced during the quake. So, in a way, he was the founder of survey research as well as seismology

Culturally, however, it was perhaps Voltaire who stamped the earthquake most firmly on the consciousness of the world. He turned from the optimism of his early days when he accepted Alexander Pope’s belief that “Whatever is, is right” and became a skeptic. His story Candide has delighted readers from that day to this and in recent years as a drama it has been produced in theaters throughout the world.

There is so much to be said about the Lisbon earthquake and the lessons the world learned from it. One book that recounts the story vividly is Nicolas Shrady’s The Last Day: Wrath, Ruin, and Reason in the Great Lisbon Earthquake of 1755. It is available in many libraries as well as on amazon.com and it will give you a lot to think about.

Now that the earthquake has hit Nepal, we can at least be thankful that international response and help came immediately. Volunteers from many countries have converged on Katmandu and the surrounding area to help victims. The damage to individuals and families can never be undone, but at least the world has learned to care and not to judge.

I think I was in fourth grade the first time I heard a teacher say, “Women can do so many things now. Someday soon we’ll have a woman president.” Well, that was more than half a century ago and we are still waiting. During the heady years after World War II, many people assumed that women who had performed so well as workers and military during the war would move on to become more active in public life. Move stars like Katherine Hepburn and Rosaline Russell gave girls role models for energetic, capable women, but the country preferred to idealize women who played up to men and accepted their roles as subordinates in the hierarchy of home, family and work.

Only three women have come even close to being seen as serious contenders to become president of the United States. The first was Victoria Woodhull, who ran a spirited but spectacularly unsuccessful campaign in 1872. After all, women weren’t even allowed to vote at that time, much less run the country. I wrote a few posts about Woodhull on this blog during the 2012 presidential race.

A hundred years after Victoria Woodhull’s attempt, Congresswoman Shirley Chisholm began her campaign to get the nomination of the Democratic Party. In 1972, she was well-known as the first Black woman to be elected to Congress. That had happened in 1968 and Chisholm had made her mark by refusing to be quiet and follow the dictates of politicians in her party. She fought to serve her constituents by supporting bills to provide federal funds for child care facilities, and she opposed the Vietnam War saying “Unless we start to fight and defeat the enemies in our own country, poverty and cacism, and make our talk of equality and opportunity ring true, we are exposed in the eyes of the world as hypocrites when we talk about making people free.”  (Unbossed and Unbought, p. 97)

Chisholm’s 1972 campaign for the presidency was never taken seriously by political leaders. She spent very little money on the campaign and was not able to hire strong staff for her efforts. The country was not ready for an African American president and especially not for one who was a woman. Throughout her career, Chisholm noted that being a woman had put more obstacles in her path than being black. Despite her failure to gain 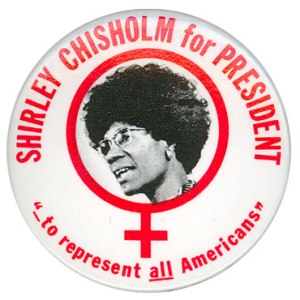 support for her nomination, (Senator George McGovern became the Democratic candidate.) Chisholm continued to be an active member of Congress until 1982 when she retired. After her retirement from politics,  she taught for several years at Mount Holyoke College. Her experience continues to inspire liberal politicians and especially women and African Americans who are still struggling to be fully represented in government. And her book Unbossed and Unbought, which she published in 1970,  remains a valuable document about a politician who fought for her constituents and was never swayed by money or political power during those halcyon days before the invention of  PACS or the ravages of corporate funding for campaigns.

And now in 2015, we have the announcement that Hillary Clinton will make another attempt to win the Democratic nomination for president. The details of the campaign and the words of her opponents will be far

different than the ones that greeted her predecessors, but the theme remains the same for many of them: women are excellent accessories to a successful candidate, but not to be trusted with the tough job of running the country. Will 2016 be the year that proves those opponents wrong? Will Americans finally decide that a woman president is just what we need to deal with the multitude of problems in the country and the world? One thing that my fourth-grade teacher might say is that it will take a woman to clean up the mess that male leaders have given us.