Today I went to the DeYoung Museum here in San Francisco to see an exhibit of paintings by J.M.W. Turner. It seemed a good way to take my mind off the painful thoughts about the terrorism in South Carolina this week. Some subjects are too painful to think about for very long, so I needed a break and joined the people eager to see the new exhibit of paintings.

Turner’s colorful paintings fill the galleries with light and the visitors crowded around each painting seemed absorbed in soaking up the color and vibrant emotion of the works. Turner was a British landscape painter, probably the best painter

England ever produced. Born in 1775, he began exhibiting his paintings early and continuing to develop and expand his talents throughout his life. His landscapes changed from being fairly straightforward presentations of natural scenes in the tradition of 18th century painters, to being explosions of color with vague outlines of buildings, people, and ships.

I walked through the galleries, stopping at each painting to admire the hazy forms and explosive colors. But as I looked at each painting, the scenes from a movie I saw a few months ago kept coming back to me—the critically acclaimed film Mr. Turner shows the artist working on some of these same paintings. As portrayed by actor Timothy Spall, Turner was a man dedicated to art but cruelly negligent about people. Despite his success as a painter, he refused to support his common law wife or his two daughters, and he sexually abused his housekeeper and treated her with contempt. He appeared to believe that his artistic talents justified his callous disregard for other people. Perhaps they did, but as I looked at his paintings, I wished that I had never seen the movie and learned the sordid details of his life. It’s too bad that that a movie once seen cannot be un-seen so that the images continue to influence any future view of the subject.

What is the value of an artist’s life compared with the value of the people (usually women and children) who suffer because of his vanity? (Of course, the genders may be reversed, but historically most artists have been men and most victims of artists have been women.) Do we really believe that all people are created equal, when people of genius are often treated

as though they are exempt from the normal moral norms of other people?

What is the value of art compared with human suffering? Do artists like Richard Wagner with his vicious anti-Semitism deserve to be honored and supported? Both Shelley and Byron, two of England’s greatest poets mistreated the women

who loved them and neglected their children. They left a legacy of beautiful poetry, but it does make me wonder whether spending a lifetime creating great art has any effect at all on the artist’s moral sense and human empathy.

What is the value of looking at great paintings, listening to fine music, and reading lovely poetry? They are produced by imperfect human beings, sometimes people we would despise if we knew them personally, but the art itself can be far better than the individual who created it. We have to accept creations made by flawed people, because we need poetry, music, and art to make our lives complete. And as Jean Cocteau once wrote:  The poet is a liar who always speaks the truth. The artists and poets of the world create beauty despite their weaknesses, so I guess we should be grateful for what we learn from them and not ask for perfection in their lives.

June has arrived and with it the promise of more weddings as today’s couples decide to commit themselves to the semi-permanence of marriage. Not as many Americans are getting married as they did fifty years ago. In 1950, only 22% of

Americans had never been married now the percentage has just past the halfway mark—50.3%. The reason for this change has often been discussed by social scientists and the media. Women now are better educated than ever before and more of them can earn a living without a husband, but this doesn’t seem to be the reason for the decline. College educated people are more likely than high school graduates, or high school dropouts, to get married. Marriages aren’t only about economics.

Does anyone remember the idea that people ought to be married before they become sexually active? Very few young people adhere to that idea now. The idea of being a virgin upon marriage has died away. According to an article in Atlantic Magazine, cohabitation has increased 900% during the last fifty years. It is now the norm for most couples to live together for a period of time before they marry. Perhaps that’s the reason why weddings have become increasingly elaborate and expensive in recent years. If a wedding does not signal a change in lifestyle, it has to become an event in itself to mark a legal change of status.

One curious thing is that even back in the days when marriage was almost the only source of economic security as well as sexual and romantic love available, some women rejected the very idea of marriage. It’s easy to forget how one-sided the rights of marriage used to be. The Founding Fathers who wrote the United States Constitution wanted to give freedom and power to citizens, but only to male citizens. Women who married in the early 19th century gave up rights to their property, their earnings, their inheritances, and their children. A husband became the head of the family and he was legally entitled to make all the decisions about where the family should live, how they spent their money, and what should happen to their children. Of course, many women were able to actually make the decisions, but they could do that only as long as they could persuade their husbands to do as they wished. It didn’t take long for women to decide they wanted some legal rights to back up their powers of persuasion. One of the foremost fighters for this freedom was Lucy Stone, although today she is almost forgotten.

Born in 1818 in Massachusetts, Lucy Stone spent most of her life as a crusader for freedom. Her life was a series of firsts. She became the first woman from Massachusetts to earn a college degree and she did it at Oberlin, the first college to

admit both women and men. She fought for the abolition of slavery and became a public speaker at a time when women were seldom allowed to speak in public. She also crusaded for the rights of women, especially their freedom to vote.

Because of the inequalities of the rights of husbands and wives, Stone was opposed to marriage, but when she met Henry Blackwell, he persuaded her that the two of them could devise and live as equals. When they were married in 1855, they read a protest against marriage during the ceremony—a protest that was later published in newspapers across the country.

We protest especially against the laws which give the husband:

The most startling decision of their marriage was for Lucy Stone to keep her own name rather than becoming Mrs. Henry Blackwell. She was praised by a few, but denounced by many for this decision In the years since, her choice has become far more acceptable to many women. Despite the unconventionality of their marriage, the two of them succeeded in building a life together. Their daughter, Alice Stone Blackwell, worked with them for many years and wrote the first biography of her mother.

Now that brides and grooms have so many more choices in in how their married life will function, it is a shame that Lucy 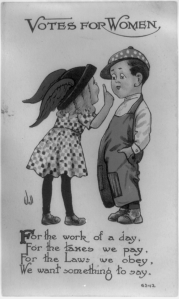 Stone has been forgotten. Without the work that she and other leaders of the suffrage movement did, women planning their weddings this year might be giving up far more than they are. If you want to learn more about Stone and her work, I recommend a thoughtful new biography, Lucy Stone: A Life by Sally G. McMillen. Perhaps that’s a book you should think of when you are choosing a wedding present for young couples.