Sometimes all it takes is a movie to open our eyes to some basic injustices. Yesterday I saw the Saudi Arabian movie Wadjda about a determined young girl—ten or eleven years old—who wants to have a bicycle so she can race with a boy who is her friend and neighbor.

The movie gives us an intimate glimpse into the life of a lively Saudi girl. She has a quiet family life as the only child of a warm, caring mother and father, although the father is only with the family on weekends.

Gradually we glimpse the stringent and seemingly meaningless restrictions on the lives of both Wadjda and her mother. In the girls’ school that Wadjda attends, the children are not allowed to play in the schoolyard when construction workers are working in the distance—the men might catch a glimpse of them. They cannot laugh or talk loudly because “a woman’s voice is her nakedness” and must never be heard by men outside of her family. Wadjda’s mother goes to work every day, but has to travel in a van with a male driver because women are not allowed to drive nor to walk on the streets. She and her daughter cannot even go shopping without asking the driver to take them to the store.

Although pre-pubescent Wadjda is allowed to walk through the sandy lots of the city and to have her face uncovered (although her hair must remain hidden), we leave the theater knowing that far more restrictions await her when she grows older.

Surely every American woman who walks out of the movie must wonder why Saudi women continue to submit to the stringent rules that limit their lives so drastically.

There are a few far-off glimmers of hope for women’s freedom in Saudi Arabia. The king has proclaimed that starting in 2015 women will be allowed to vote and to run in local elections. That is a start. Most women, however, long for the freedom of driving more than they long for the vote. BBC World News reports that a new campaign asking for the right of women to drive has attracted more than 11,000 signatures. The day on which Saudi women are planning to take to the roads is October 26, 2013. To some activists, the right to drive seems trivial, but if you think about what it would mean to be unable to leave the house until some man can be found to drive you on any errand or visit, it’s easy to understand. Day after day women suffer the embarrassment, expense, and humiliation of being totally dependent on the wishes of a male who has the key to a car.

Even though the number of Saudi women who have learned to drive must be tiny—only the educated members of a wealthy family would ever be able to learn—it is at least a start. When women have the ability to travel locally and to visit one another without supervision, who knows what independent plans they may foster? Those of us who live in the West should all support the Saudi women in their efforts. Let’s join together to hope that someday Wadjda could have not only a bicycle, but the keys to a car so she can grow into the kind of strong, independent woman that is needed in Saudi Arabia and the world.

This week when most Americans are breathing a sigh of relief because it looks as though the Syrian crisis may be ended without bombs, it’s a good time to think of some of the other peacemakers who have worked to remove some of the worst weapons from the world. Jody Williams and the people who worked with her to ban the use of landmines is one of the most prominent.

Just over twenty years ago, in 1992, Williams started the International Campaign to Ban Landmines (ICBL) which worked tirelessly to convince countries and international organizations to join together to outlaw the use of landmines. These mines have been used for several centuries in wars in Asia, Europe and the Americas, but their use increased toward the end of the twentieth century. Television brought sickening pictures of the victims, many of them children, into the world’s living rooms.

Landmines are shocking weapons when they are used to kill and maim soldiers, but their use goes far beyond that. Anti-personnel landmines stay buried in the earth for years—for generations—and the damage they do can be seen in the number of people with only one leg, or no hands, or other body parts missing. Small children hobble around on crutches because a seemingly harmless walk through a field led to a devastating explosion that brought pain and misery. No number of free crutches or doctor services can undo the lasting harm.

When Jody Williams decided to start the International Campaign to Ban Landmines, it must have looked like an overwhelming job. Slowly and painfully through collecting enough money to raise the issue publicly and finally shame most governments into signing the ban, the organization made headway. 161 states have signed the Ottawa Treaty banning the use of anti-personnel landmines although neither Russia nor the U.S. has done so. The U.S. has said that it needs to have the freedom to use landmines in the DMZ between North and South Korea. Americans still need to push our legislators into finding other ways to fight wars—methods that don’t involve the killing and maiming of innocent civilians.

But this week Russia and the U.S. are working together to find a way to stop the use of chemical weapons in Syria. It’s not a perfect solution to the violence in Syria; the civil war continues there, but it is an important effort. If Syria can be persuaded to give up chemical weapons and destroy them, the world will have moved one small step toward greater peace.Perhaps someday John Kerry and his Russian counterpart Sergei Lavrov will join the roll of peacekeepers. If Jody Williams and her colleagues can persuade countries to ban landmines, surely two powerful government officials can work together to eradicate another one of the world’s devastating war tools—chemical weapons. That would surely be a blessing for all of us. 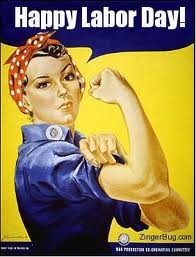 Judging by the store ads in my Sunday paper, Labor Day means nothing more to most Americans than a day off for shopping and barbeques. A hundred years ago, having a special holiday to honor working people seemed much more important. People felt united as workers, as employees struggling to decent working conditions. One of the triumphs of the labor movement was the establishment of the Department of Labor in May 1913.

Why was it such a big deal? Well, despite the lack of enthusiasm in the Washington establishment, union leaders across the country hoped that having a voice for labor in the cabinet would make a difference. And believe it or not it has. For one thing it changed the composition of the cabinet to include the non-wealthy. Dwight D. Eisenhower’s cabinet in the 1950s was called “Nine millionaires and a plumber” Can you guess which department the plumber headed?
Take a look at the website for the Dept. of Labor and look at the timeline there. You’ll be surprised at the changes that started at the department.
• Supported the Workman’s Compensation Act to get benefits for injured workers
• Started the women’s bureau in 1920
• Started collecting unemployment statistics—previously had only collected employment statistics and not worried about the unemployed
• Limited working hours for children
• Pushed to get Social Security benefits for workers

Perhaps as we share a holiday with family and friends, we should spare a thought for the people who fought to bring us some measure of security in our jobs.

I find it interesting to think about the women who were leaders in the early labor movement. Frances Perkins, the longest serving Secretary of Labor is largely responsible for shepherding Social Security and other New Deal programs through Congress. Her method of being a leader in a man’s world of politics was to downplay her femininity and her sexuality. She was famous for wearing drab, old-fashioned clothes and at social gatherings was not seen as a threat to the wives of her colleagues. Perhaps at that time in Washington her nonthreatening appearance was an important part of her being able to outmaneuver those husbands in politics.

An even earlier labor leader, Mary Harris or “Mother Jones” took the same approach. She claimed to be older than she really was and she too wore old-fashioned black dresses. She gloried in being called “Mother”. Surely there was no better way for her to protect herself from unwanted sexual advances or harassment. She was able to win many labor

battles by enabling male workers to take the lead and fight the bosses to achieve some famous labor victories. There isn’t time here to go into the wonderful story of how Mother Jones won so many victories for “her boys”. They are well told in Elliott J. Gorn’s biography Mother Jones; the Most Dangerous Woman in America. But let’s raise a toast and remember an early verse written in her honor in the United Mine Workers Journal:

We love her for her constant voice.
Raised ever ‘gainst wrongs and ills,
For healing the bodies, bruised and torn,
In the factories, mines and mills…