Emily Carr was a precocious artist—when she was a child she surprised her parents by drawing the family dog, “I sat beside Carlow’s kennel” she writes in her autobiography, “and stared at him for a long time. Then I took a charred stick from the grate, split open a large brown-paper sack and drew a dog on the sack.” Emily was eight years old at the time.  Her talent was obvious to her parents from that picture and so she was allowed to study drawing, but both of her parents died while she was young and there was little encouragement for her to do anything except to follow her sisters’ examples and prepare for marriage and families. Her path to becoming a recognized artist was long and difficult. As a teenager she persuaded her guardian to let her go from the family home in Vancouver down to San Francisco to study art, but later she returned home and gave up painting.

For several years she pursued an eccentric life, keeping a boarding house to earn money and to pay for a menagerie of animals as pets. Her family, she believed, were stuffy and conventional and limited her artistic possibilities. She spent years, which grew into decades, in pursuit of skills that would allow her to become the artist she wanted to be She had a passion for the natural world around her in western Canada. As a child she rode a pony into the woods where she marveled at the sights and sounds around her. On a trip to Alaska in her twenties she discovered the arts of the Native peoples of the Northwest and the towering totem poles they carved. All of these sights would eventually fuel her art, but it was a long time before the transformation began.

Vancouver was on the outskirts of the art world of the time—the turn of the twentieth century—and Vancouver was so far outside the center that Carr was not aware even of the art being produced in Toronto and the rest of Ontario. She became discouraged about her painting and even after she had a chance to study for a while in Paris, she still did not feel that she was capable of being an important artist. She suffered from the familiar female feeling that artists were men, and many of the male artists she met were content to patronize the women who attempted to become part of the art world. Then at last she met the artists who would open the world for her.

The Group of Seven painters who worked mainly in Ontario were Canadian artists who had found a new way of presenting the beauty of the North to others. Lawren Harris, in particular, became a mentor to Emily Carr and helped her to see that the pictures she was struggling to make of Northwestern Canada and the Indian life there were worth doing. When A.Y. Jackson, another member of the group, told her that “Too bad, that West of yours is so overgrown, lush—unpaintable,” Harris told her to keep faith in what she was doing. When she went back to Vancouver, she was able to continue and in the last decades of her life produced works that have lasted. Even though they are not yet as well known outside of Canada as they deserve, those of us who see them believe that Emily Carr may have been a late bloomer, but her work will live long.

Anyone who is interested in knowing more about Carr’s life should read her autobiography “Growing Pains”. She tells a good story and for a reader who wants more detail and more objectivity, there are several good biographies to choose from Best of all, however, try to see her paintings, either in person or in the reproductions available online and in print.

For those of us who believe history gives us a way to understand the world we live in, the recent events in Northern Mali have been especially wrenching. Mali is a poor country, but it has a long tradition and a strong culture that gives its citizens shared valued and enables them to live in dignity and to cope with their hard existence. During the last few months, ever since the March coup against the government in Bamako, that culture has been under attack in Northern Mali and especially in the ancient city of Timbuktu. 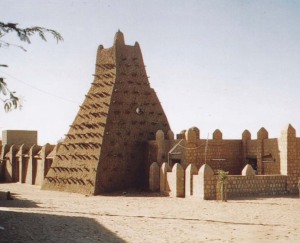 If you have ever visited the remote city of Timbuktu, you have probably been impressed, as I was, by the exotic beauty of the city. It’s almost ten years since I traveled there with a group of American tourists. We flew on a chartered plane and landed at a modern looking airport after having flown over miles of a lovely sandscape contoured into pale colors and shapes. When we disembarked, we found ourselves almost alone at the airport. We were told that there was only one scheduled flight a week into and out of the city. Eventually we got our hand luggage and piled into all-terrain vehicles, which are the only vehicles that can travel on the unmarked, sand covered roads.

Timbuktu looked like nothing else I’ve ever seen–the buildings are made of mud or stucco, and the roads and open spaces are covered with sand. It’s impossible to tell whether the roads are paved or not. They curve around the city and our drivers zoomed around buildings, donkeys, children, men in long robes and women in subdued colors walking along the streets. Most of the women balanced tubs of water on their heads.

As soon as we dropped our things at the hotel, we were taken to see the mosque, the oldest mosque in Mali. Our guide, who worked for the Ministry of Culture, had a degree from Western Illinois University, and was in charge of preserving the culture of Timbuktu which had been named a UNESCO world heritage site. The mosque we visited was built in the fifteenth century and has been in use ever since. We took off our shoes outside, with the crowd of young boys offering to help, and then followed our white-robed guide into the mosque. He took us through the narrow halls to show us the elaborate carved wooden doors, the tombs of the saints, and a small courtyard. The floors and grounds were covered in sand; the courtyard had one small tree in which a few flame finches fluttered.

We also went to a private library to see a collection of manuscripts. Henry Louis Gates had given the money to build the library, but the collection belonged to a private family. All the manuscripts were in Arabic, the earliest dating from the 12th century, and among them were some of the most prized treasures of Islamic culture.

Our dinner that night was served on the terrace of the upper floor of the hotel. The air was cool by 7:30 when our meal began, the sun had gone down but it was still light. Waiters lit candles on our long table before serving us delicious vegetable soup. Then they brought in a whole roast lamb, which Ballo had arranged for us to have barbecued. The meat was tough and stringy, the result of eating free range lamb. We also had couscous, vegetables, and for dessert a creme caramel. It was delightful dining under the moon (few stars in sight) with a cool breeze blowing. The streets were almost completely quiet and the darkness beyond our hotel was overwhelming.

The next morning we had breakfast on the same terrace. We could look down and see men pulling loaves of bread out of the ovens on the street below. Everything tastes slightly of sand; even the bread had a grittiness from the fine sand that blew into the dough as it was being prepared. Our guide told us that people who live in the city often lost their teeth early because the sand in their food slowly grinds down the enamel. 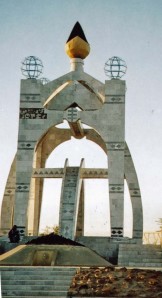 That trip was in 2003, now all of Timbuktu has changed. A radical Islamist group have taken over most of Northern Mali and determined to destroy the tolerant Islamic culture that had developed there. According to the BBC News “The Ansar Dine group, which is said to have links to al-Qaeda, seized control of Timbuktu earlier this year and said it destroyed several of the city’s shrines as they contravened its strict interpretation of Islam. Ansar Dine spokesman Sanda Ould Bamana told the BBC that Islamic law did not allow the building of tombs taller than 15cm (6in).” The tombs that had stood for hundreds of years were destroyed and so was the magnificent wooden door of the mosque. People in Timbuktu are fleeing to Bamako or to other countries because armed men are roaming the streets enforcing strict sharia laws.

What is it that drives people to destroy the past? What is it that makes warriors think they can erase history and rewrite it as they think it should be? Perhaps we’ll never know the answers, but the least we can do is to try to preserve as much of the history of our world as we can. And we can encourage UNESCO, which has announced that it is concerned about Timbuktu, to act quickly to try to preserve these important cultural artifacts. They are important not only to Malians but to people everywhere who care about human culture.