As she mourns the death of her infant son, Charlotte Edgerton finds the gray skies and gritty poverty of an unfamiliar city almost more painful than she can bear. London in 1846 is far from the gracious society Charlotte and her husband Daniel had imagined. Dark skinned strangers from Britain’s far-flung empire are demanding justice, but the young Queen Victoria and her court seem unwilling to listen. Even worse, Charlotte’s naive brother Tom is being drawn into a radical political group that Charlotte fears will lead him to violence and perhaps death. Meanwhile the city is growing more and more crowded with impoverished immigrants from famine-stricken Ireland. When one of her young Irish friends—a kitchen maid—dies in a tragic fire, Charlotte believes it was no accident. But uncaring policemen scoff at her suspicions and refuse to investigate. Charlotte discovers that she must search for the villain on her own.

In volume 3 of the Charlotte Edgerton Mysteries series, Charlotte and Daniel have left the boisterous streets of New York and moved to London where Daniel takes up a new job on a weekly newspaper. After their adventures in New York City (which you can read about in volume 2 of the series, Death Visits a Bawdy House) they find themselves in a city even more dangerous than the one they left behind.

During these past months while I was finishing this book the U.S. presidential campaign was in full swing. I couldn’t help thinking about how today’s campaign echoed what was happening in London more than a century ago. Some things never change—when famine and war devastate a country, people move on to more prosperous places. But often they find little welcome there. Wealthy men struggle to hold on to their traditional privileges, while working people fear their jobs and way of life will disappear. But all is not doom and gloom even in London. Charlotte Edgerton and her family find new friends and new hope as they struggle for greater justice and freedom in an old country.

To celebrate the publication of this third volume in the Charlotte Edgerton Mysteries series, I will send a free copy of the book to the first three people who write a comment on this blog post. I hope you enjoy the story!

With a national election coming up soon, there has been much talk about whether or not the national election might be “rigged”. When Donald Trump said, during the third presidential debate, that he wasn’t sure he would accept the results of the election,

reporters and the social media went wild. The idea that an election must be fair and accepted by the country is basic to maintaining a democracy. Trust in elections has worked well for American voters and there have not been serious challenges to a national election for many years. But if you look back in history, the struggle for free and fair elections has been long and hard.

The American way of voting was based largely on the British system, but that was badly flawed. Only men who owned property were allowed to vote at all. Men who were elected to Parliament were not paid for their service, so you had to be wealthy if you wanted to run for a position in Parliament. Actually, the British don’t say they “run” for office; they “stand” for election. I guess that sounds more genteel.

The elections, however, were not very genteel. Even though an important reform bill was passed in 1832 to do away with some of the most obvious unfairness in elections—like having a member of Parliament who represented no one but himself –the elections were still not honest. Candidates would bribe men to vote for them. Pubs were filled on election day with representatives of the candidates who would buy drinks for any voter who promised to cast his vote for their candidate. 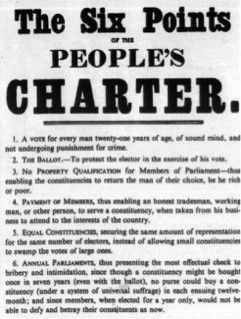 During the 1840s, a surge of protest against the way things were for the average working man began to grow. The Chartists was an organization formed to take power away from the aristocrats and make sure that average people would get fair treatment. They had six demands:

Both men and women joined the Chartist struggle and women were especially scorned by many anti-chartists in the media. Here is one view from the opposition:

The struggle was hard and long. I’ve been living with it for the past year and more as I’ve been writing my newest Charlotte Edgerton mystery Death Calls at the Palace. Finally my book is about to appear and you will be able to buy it on Amazon.com in plenty of time for holiday gifts. I’ll announce its appearance as soon as it becomes available.

Saturday was a magnificent October day in San Francisco—sun sparkling on the Bay, tourists filling the streets, and the Blue Angels zooming their planes across the sky. But I didn’t spend it outdoors watching all the fun; instead I was inside all day with a group of 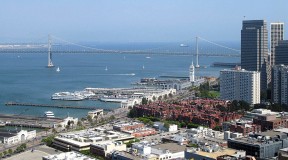 about forty other women and a handful of men struggling with the joys and mysteries of writing mysteries. This was a conference of the Sisters in Crime group which offers fellowship and encouragement for those of us who follow the footsteps of Agatha Christie, Dorothy Sayers and the other fearless women who invaded the publishing world during the last century.

Mystery books and thrillers are the most popular genres of fiction and while both men and women read these books, statistics show that more women than men read books of all kinds. So it is not surprising that a group like Sisters in Crime was established to promote the advancement, recognition and professional development of women crime writers. As the publishing world changes year by year with more authors choosing to publish independently and social media becoming a major factor in book promotion, writers associations are more important than ever. Meeting aspiring writers as well as successful ones can lead to many fascinating conversations and introduce new worlds of experience and knowledge.

Agatha Christie probably could have used a support group of writers when she was building her writing career. The survivor of an unhappy marriage, Christie seems to have led a very lonely life during the years when she and her first husband were breaking up. She famously disappeared for eleven days, causing a police search and an enduring

mystery about whether she suffered from amnesia or had planned the disappearance to embarrass her unfaithful husband. After the couple divorced in 1928, Christie started on a long tour of the Middle East. She became fascinated by the area and by archaeology. Her new interest  led to a second, happy marriage which lasted for the rest of her life.

The story of Agatha Christie’s trip to the Middle East has also led to a recent book, The 8:55 to Baghdad, by Andrew Eames, a Christie fan who in 2002 decided to follow Christie’s trip from London to Iraq. You don’t have to be a fan of Agatha Christie to enjoy his story. When Christie made the trip by train in 1928, intercontinental train travel was far more elegant than it is now in the 21st century. The famous Orient Express is a pale shadow of what it used to be and most travelers would have given up on the trip while the trains inched across Europe toward Turkey, but Eames pushed on. He tried to stay as close to Christie’s route as he could and sought out the hotels she stayed in and locations she mentioned, but 75 years makes a big difference in countries and cities, especially after World War II and several smaller wars since.

The most fascinating part of the book, to me, is Eames’s account of travelling through Iraq in the uneasy months after 9/11. For this part of the journey he joined a group that had been given permission to look at archeological treasures, but officials were suspicious and kept a close eye on the travelers. The Iraqis themselves were friendly for the most part, but all of them lived in fear that a another war would start, as indeed it did. As the group visits Aleppo, Palmyra, and other cities that have been in the news recently, we can understand more clearly what has been lost by ten years of fighting in the region. Many of the archeological treasures that Christie and her husband explored appear in the TV news that we watch today as ruined cities fought over by clashing groups. The book left me feeling profoundly sad for all the destruction that has been visited upon the Middle East and the people who live there.

The mysteries of the real world and its struggles are far more serious than the mysteries that appear in fiction, but telling stories has always strengthened the spirits of both writers and readers. Reading about a world in which reason prevails comforts us when the real world appears ever more chaotic. Perhaps that is why Agatha Christie has become, according to the Guinness Book of World Records, the best-selling novelist of all time. And perhaps that is why so many of the authors of Sisters in Crime continue to write and readers continue to read their books.