May is Asian Pacific Legacy month, so it was an especially good time to visit the Asian Art

Museum in San Francisco. I saw their Tomb Treasures exhibit and was stunned by the remarkable beauty of objects created two thousand years ago. The graceful lines of a

dancer’s movements are immortalized in stone for us to marvel at. The beauty of a solid jade tomb and a set of jade armor is a legacy for all of us. Centuries come and go, but there is something heartening in knowing that across the centuries humans have created art that will enrich their descendants.

San Franciscans are lucky to have the magnificent Asian Art Museum in our city as well as so many other reminders of the Asian legacy like the famous Japanese Tea Garden in Golden Gate Park. All of these are an integral part of this country’s treasures that have been brought from so many parts of the world.

Americans haven’t always appreciated the value that Asians have brought us. One of the tragic heritages that lingers on in the memory of many people still alive is the 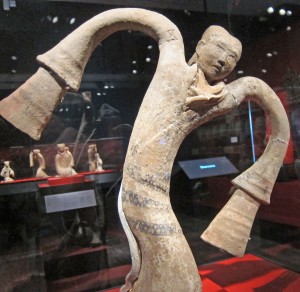 internment of people of Japanese descent during World War II.

Julie Otsuka’s book When the Emperor Was Divine gives an unforgettable picture of what happened during the early 1940s. Otsuka tells a touching story about a Japanese-American family living in Berkeley, California, in 1942 who are sent to an internment camp in Utah. Although the family had been living  peacefully in their community for years, the father was suddenly arrested in the middle of the night and taken away. Then the mother and her two children are ordered, along with other Japanese-Americans on the West Coast, to leave their home for a detention camp.

The book is beautifully written and painfully sad to read. When the family is allowed to return home, they find their lives drastically changed. The reader is left wondering how or whether they will ever be able to return to normality.

Otsuka’s book is a reminder of how many mistakes Americans have made in treating people as part of a group rather than as the individuals they are. Our Asian legacy is filled with light and darkness. We must not let the dark parts of its history be repeated.