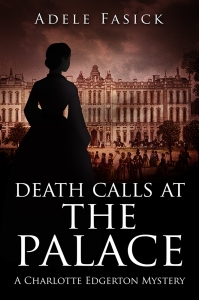 As she mourns the death of her infant son, Charlotte Edgerton finds the gray skies and gritty poverty of an unfamiliar city almost more painful than she can bear. London in 1846 is far from the gracious society Charlotte and her husband Daniel had imagined. Dark skinned strangers from Britain’s far-flung empire are demanding justice, but the young Queen Victoria and her court seem unwilling to listen. Even worse, Charlotte’s naive brother Tom is being drawn into a radical political group that Charlotte fears will lead him to violence and perhaps death. Meanwhile the city is growing more and more crowded with impoverished immigrants from famine-stricken Ireland. When one of her young Irish friends—a kitchen maid—dies in a tragic fire, Charlotte believes it was no accident. But uncaring policemen scoff at her suspicions and refuse to investigate. Charlotte discovers that she must search for the villain on her own.

In volume 3 of the Charlotte Edgerton Mysteries series, Charlotte and Daniel have left the boisterous streets of New York and moved to London where Daniel takes up a new job on a weekly newspaper. After their adventures in New York City (which you can read about in volume 2 of the series, Death Visits a Bawdy House) they find themselves in a city even more dangerous than the one they left behind.

During these past months while I was finishing this book the U.S. presidential campaign was in full swing. I couldn’t help thinking about how today’s campaign echoed what was happening in London more than a century ago. Some things never change—when famine and war devastate a country, people move on to more prosperous places. But often they find little welcome there. Wealthy men struggle to hold on to their traditional privileges, while working people fear their jobs and way of life will disappear. But all is not doom and gloom even in London. Charlotte Edgerton and her family find new friends and new hope as they struggle for greater justice and freedom in an old country.

To celebrate the publication of this third volume in the Charlotte Edgerton Mysteries series, I will send a free copy of the book to the first three people who write a comment on this blog post. I hope you enjoy the story!