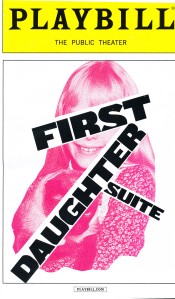 Seeing a new play while it is still in preview, before any reviews have appeared, is always fun for me. Without having anyone else’s judgment to guide me, I can pretend to be a Broadway critic on opening night. A few days ago I had a chance to do that while I was in New York for the weekend—not on Broadway but at the Public Theater downtown where so many legendary plays have opened.

This time my chance came with a new musical, First Daughter Suite, by Michael John LaChiusa, which is based on the lives of the wives and daughters of recent U.S. presidents. The four scenes feature Pat Nixon and her daughters Julie and Tricia; Betty Ford and Rosalynn Carter with daughters Susan Ford and Amy Carter; Nancy Reagan with daughter Patti Davis; and finally Barbara Bush and Laura Bush with the ghost of Barbara’s daughter Robin, who died as a child. The production is superb, the music charming and appropriate, and the acting spectacular. Almost all of the actors play two roles and playing two such different women as Nancy Reagan and Betty Ford during one performance, as Alison Fraser does, is an amazing feat. Each of the  performers inhabits her role with remarkable grace and complete conviction.

What lingers with me still, several days after I saw the show, are questions about how much reality the show reflects. The six president’s wives portrayed are familiar to most of us through the immense publicity they received during their husband’s campaigns and time in office. Each of them took on the difficult job of serving as first lady and met the requirements of not causing a public crisis or major embarrassment despite the glare of publicity goes along with the presidency these days. They must be both tough and capable; yet somehow in this play they come across as victims. The White House is regarded almost as a prison that both mothers and daughters would like to escape.

None of the women portrayed in this play show much interest in any of the policies their husbands were pursuing, yet earlier first ladies frequently influenced, and by some account dominated, their husband’s choices of positions and personnel. If we look back at history, even the quietest first ladies were active participants in the business of government.

I am pretty sure that the first ladies portrayed in First Daughter Suite were not only observers, much less victims, of their husband’s actions. Although First Daughter Suite gives us a fascinating glimpse of life in the White House, I’m still waiting for a play that will show us a more rounded portrait of the women

who have lived there.

3 thoughts on “First Ladies and how they’ve changed”