This summer has been filled with bad news stories as wildfires devastate the Western states, Congress and the President tangle over the Iran nuclear proposal, and thousands of migrants flee war torn Syria trying to get into a reluctant Europe. It’s no wonder that so many of us turn to sports as a way to forget what’s going on. Tennis always reaches a crescendo this

time of year and it has been a delight to watch Serena Williams march through victory after victory. Who wouldn’t wish her luck in achieving a grand slam of titles in women’s tennis this year? Unfortunately, she didn’t quite make it. As sometimes happens in real life as well as in fairytales, a newcomer appeared who managed to defeat Serena and end her hopes for a grand slam. But Serena Williams is still a champion, probably the greatest female athlete we have ever seen.

Tennis has been a field of glory for women ever since it was introduced to America by a woman almost 150 years ago. According to the New York Times (Aug. 27, 2006) Mary Ewing Outerbridge, of Staten Island, was visiting relatives in Bermuda when she encountered some British Army officers playing tennis. at a garden party in Wales in December 1873 and had just arrived in Bermuda, where British Army officers were playing it. Being an enterprising young woman, Miss Outerbridge brought back from Bermuda a net, balls and rackets, and

specifications for the size of the courts. The strange gear was confiscated by customs agents but Mary’s brother was able to use his influence to get customs to release it. Tennis was a hit in New York and it soon spread across the country.

Tennis has always been one of the few sports that has been open to women as well as men, although the championship games have been single-sex events. Women’s championships were not considered as important as the men’s events. In 1973, Billie Jean King accepted a challenge from a former tennis champion, Bobby Riggs, who had boasted that a weak male player could easily beat a woman. Dubbed “the Battle of the Sexes”, the Riggs-King match 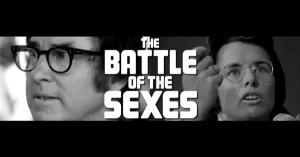 took place at the Houston Astrodome in Texas on September 20, 1973. The game got a lot of publicity and when Billie Jean King won, she felt that she had struck a blow for women everywhere. The women’s game began to be taken more seriously.

Serena Williams and her sister Venus have brought more attention and respect to the women’s tennis tournaments than they ever had before. This year, Serena got more publicity than any of the male players and tickets for her matches were the most highly prized ever. It’s about time a woman was the biggest attraction!  Like so many of her other fans, I am sad that Serena Williams did not make her grand slam, but she can be content that she has set a great example for girls and women around the world. We are all wishing her good luck. After all—there’s always next year!