Although it will be more than a year before we face another presidential election, the media is already filled with stories of men and women who have declared themselves candidates. You may think we have quite a few colorful and unusual candidates in this cycle, but have you ever heard about the candidate from the past who spent Election Day in jail and who wasn’t allowed to vote?Victoria Woodhull

The year was 1872, and the candidate was Victoria Woodhull, the first woman who declared she wanted to be president of

the United States. Her presidential campaign raised questions from the time it started. Whether it was legal or not is still an undecided question. Victoria and other members of her Equal Rights party claimed that women were defined as citizens in the U.S. Constitution and they had the right to vote and run for office. She based her claim on the Fourteenth Amendment’s provision that “All persons born or naturalized in the United States, and subject to the jurisdiction thereof, are citizens of the United States and of the State wherein they reside.” Women are persons and are therefore entitled to vote. The argument persuaded some people, especially women who had never been allowed to vote whether they were citizens or not.

And who was Victoria Woodhull? Born in Ohio in 1838, she had grown up in an unstable and impoverished family. She declared she had been “a child without a childhood” because her father had put his daughters to work as soon as he realized they could tell fortunes and claim healing powers. Victoria escaped from him by running away at 15 to get married, but the husband she chose was as shiftless as her father. He quickly became an alcoholic and a philanderer. Fed up with his neglect and dependence, Victoria divorced him and decided to make life on her own terms with her two children.

Some women in those circumstances might have struggled to maintain respectability by turning to teaching, but respectability was not high on the list of Victoria’s priorities. She had discovered spirituality and believed in her power to foresee events to come. Her sister Tennessee was also a clairvoyant and both sisters were quite willing to use their talents as well as their sexual appeal to earn money. Both were at various times accused of being prostitutes, but they were clever enough to use their sexual availability to their advantage. During the late 19th century when a married woman could lose her husband, children, and livelihood by a single slip into adultery, while married men were free to consort with prostitutes and enjoy their sexual adventures without losing anything. Tennessee and Victoria claimed the same privilege.

Following Victoria Woodhull’s trail offers some tantalizing clues about what 19th century America was like. Who knew that these women in their long skirts and corsets were asking the same questions we are asking today? Certainly I had never known how much Victoria’s spiritualist beliefs influenced the women’s rights movement. She was not the only member of the group who believed that spirits speaking to them from beyond the grave gave them ideas for their campaign. Spiritualism, which had started about 1848, the same year of the first Women’s Rights Convention, attracted many American radicals. Campaigners for both abolition of slavery and for women’s rights tended to gravitate toward the group because it welcomed new ideas and encouraged individualistic thinking. Victoria Woodhull first gained fame, and made a living, by going into trances and predicting what would happen in the future. She believed firmly that spirits spoke directly to her and guided her in her life. Perhaps it was only natural that people who lived unconventional lives were attracted to the idea that they could find truth on their own with the help of spirits rather than through conventional religion with its unbending rules.

Whether or not Victoria found the truth in spiritualism, she certainly found worldly success. At least she, her second husband, Captain Blood, and her sister Tennessee Claflin became rich through their association with Cornelius Vanderbilt. 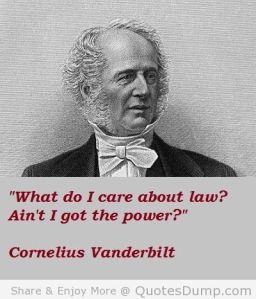 Victoria and her sister met Vanderbilt, whose wife had recently died, when they moved to New York. Victoria and Tennie (as she was called) charmed the elderly Vanderbilt, who had been famous for being attracted to beautiful women. When Victoria began to offer him advice about investments, he decided to set up the two sisters as brokers. Their unconventional business attracted many customers and they made a great deal of money for themselves. Perhaps it was Victoria’s business success that gave her the courage to enter political life.

Victoria Woodhull’s declaration that she would be a candidate for President of the United States was a bold move that electrified voters in 1870.  In May 1872, the name of Victoria’s People’s Party was changed to the Equal Rights Party. The party officially nominated Victoria for president and she chose Frederick Douglass, the well-known ex-slave and public speaker, as her vice-presidential running mate. (He later said that he had never heard anything about it.) Both Elizabeth Cady Stanton and Isabella Beecher Hooker, strong supporters of women’s right to vote, supported Victoria’s candidacy, but neither of them believed she had a chance to be president. Because Victoria’s spirit counselors had told her she was destined for high office, she herself firmly believed she would win. This was the first presidential election in which women’s suffrage was an issue, because it was the first one held after the formation of the National Woman Suffrage Association and the American Woman Suffrage Association in 1869.

While the three different suffrage groups were arguing among themselves, the traditional political parties also struggled over their candidates. Ulysses S. Grant, a Republican, was seeking a second term, but the so-called Liberal Republicans split from the main party and nominated Horace Greeley, founder of the New York Tribune. Greeley also got the Democratic nomination. After the turmoil of nominations the campaign itself was one of the most bitterly-fought campaigns in American history.

Victoria’s unquestioning faith in her spirits led her astray when it came to politics. In the end it wasn’t the search for voting rights that brought her down, it was the familiar question about sexual purity and scandal. Victoria and her sisters had lurid pasts compared to those of the other women leading the suffrage movement, but these respectable women also had many secrets to hide. The intrigues and infidelities of leading male citizens touched the lives of their wives as well as their mistresses. Henry Ward Beecher, a distinguished minister and civic leader, was especially vulnerable. His sister Isabella Beecher Hooker was one of Victoria’s strongest supporters, but when rumors about her brother started circulating, she was torn. Unfortunately, Victoria, because of her friendships with brothel managers and prostitutes, knew many of the most scandalous stories in New York.

Victoria Woodhull believed in sexual freedom, as many of the suffragettes did, but she practiced it more than many others 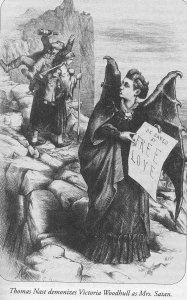 . This made her vulnerable to political opponents who spread stories about her and pilloried her in the press. Thomas Nast in his cartoons made her a special target as “Mrs. Satan”. After that cartoon appeared Victoria’s political life was dead. Her speaking engagements were cancelled and her supporters fled to other candidates. Embittered by the desertions, Victoria finally printed an article revealing the affairs of Henry Ward Beecher and other leading citizens. This is what led to her arrest and was the reason she spent Election Day in jail rather than at the polls. Some of the women’s suffrage leaders did attempt to vote; Susan B. Anthony cast a ballot, but her vote was not counted and she was given a $100 fine for the attempt. The election which seemed to promise vindication for women’s rights proved to be a miserable failure for them.

Today, as we look back from the enormous new freedoms in sex and marriage that have been gained over the last hundred years and more, it’s hard to know what to think of Victoria Woodhull. She pioneered many of the ideas we now accept as desirable. Who would go back to the bad old days when women weren’t allowed to vote or manage their own money or divorce their husbands and keep custody of the children? At the same time, we have to admit that Victoria would have been a terrible president. Going into trances and listening to the voices of spirits got her a long way, but they probably wouldn’t have provided a clue about how to reconcile the North and South after the long destruction of the Civil War. We can admire her spirit in making public some of the sins of hypocrites who were running the country, but we have to admit that her unsavory activities (and her disreputable family) set back the suffrage by decades. Women didn’t finally get the vote in the United States until the passage of the 19th amendment 1920. 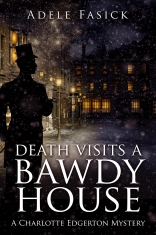 My next book, the second in the Charlotte Edgerton Mystery series, Death Visits a Bawdy House, which will be published later this month, dips into some of the same issues that plagued Victoria Woodhull. Charlotte discovers that New York City in 1843 was called Sin City because of the visibility of sexually free women on city streets. Victoria Woodhull would have felt right at home.

3 thoughts on “Scandalous Candidates are Nothing New–Have You Heard of Victoria Woodhull?”