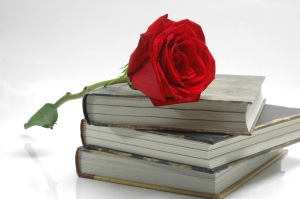 I’ve spent a surprising amount of time this month looking at old books, first at the California Antiquarian Book Fair  where I saw an amazing number of valuable and beautiful old books. It’s fascinating to see early editions of books by the likes of Charles Dickens and Willa Cather, all of them far too expensive to buy of course. Old children’s books from 30, 40 or even 50 years ago were featured by some of the dealers. I guess a lot of book collectors enjoy rereading the books of their childhood. And as I discovered later in the week, I am one of them.

A few days after going to the Book Fair I went to an estate sale in a neighborhood not far from where I live. The owner had been an antiquarian book dealer and the house was jammed not only with the usual stuff of estate sales—costume jewelry, china dishes, and small pieces of furniture—but with shelf after shelf of old books. Many of them were leather bound, small

books from the 19th century or cloth bound books from the early 20th century. Wandering along those shelves, pulling out the books was a great pleasure, but it took a while until I came to my greatest prize. I found a small book that I remembered from my childhood—the tale of Aucassin and Nicolete.

It was one of my favorite books from the branch of the public library in Queens that I visited so often. I remember exactly the place where it stood on the shelf, near the fireplace where the librarian used to conduct her story hours. I was surprised to find the romantic tale again and surprised to recognize the black-and-white line drawings in the book. Luckily for me, the book only cost seven dollars, so I was happy to bring it home where I could pore over those pictures the way I used to do when I was a twelve-year-old in love with romantic stories. The lines of poetry that close the story still sound charming:

Aucassin is blithe and gay,

Nicolete as glad as May.

And they lived for many a day,

And our story goes its way.

What more to say?

today are far larger and more elaborate than the books I remember from the library.  I guess television and online entertainment have drenched our world in so much color and action that quiet black-and-white drawings and stately, old-fashioned stories no longer hold a reader’s attention. Graphic novels have won a place in children’s libraries; refugees and death have become a focus of attention and action often jumps far more quickly than it used to. The world is big and children should be introduced to many aspects of it. I just hope that they will spend enough time with their books that they will remember them and when they are older will be able to turn back to their favorites and enjoy them just as I do mine.

3 thoughts on “Recapturing the past one book at a time”