It has taken me two days to absorb the information that President Trump has decided the United States will drop out of the Paris Climate Accord, which was signed with such cheering only last year. I have to wonder how much the President looks around the world that both he and I live in.

The first time I really noticed how a changing climate can affect people’s lives is when I visited Mali in 2003. We flew to the small airport in Timbuktu passing over miles of empty sandscapes. Timbuktu looked like no place else I had ever seen–the buildings are

made of mud or stucco, and the roads and open spaces are covered with sand. It’s impossible to tell whether the roads are paved or not. They curve around the city and our drivers zoomed around buildings, donkeys, children, men in long robes and women in subdued colors walking along the streets. Everything tastes slightly of sand; even the bread had a grittiness from the fine sand that blew into the dough as it was being prepared. Our guide told us that people who live in the city often lost their teeth early because the sand in their food slowly grinds down the enamel.

The following year, I went to Argentina and saw the glaciers of Patagonia. Many of them are now sliding inexorably into the sea. The loud crack of huge chunks of ice breaking off and being swallowed up by the ocean punctuated our trip. Now, more than ten years 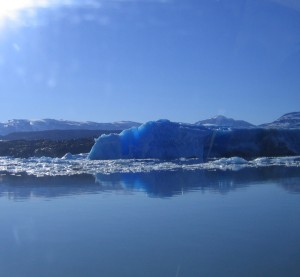 later, the ice is breaking off even faster. Huge cracks are appearing in the glaciers of Antarctica. How can anyone believe that climate is not changing?

It’s not as though the idea of climate change hasn’t been discussed for many years. The medieval idea that the world is unchanging and that human beings have no influence on it was challenged more than 200 years ago by Alexander von Humboldt, one of the greatest scientists the world has ever known.

Humboldt traveled to South America in 1800 to explore nature and culture in the Spanish colonies there. When he saw the changes that Europeans has brought to the country by cutting down forests and cultivating lands, he developed his theories of how men affect climate. “When forests are destroyed, as they are everywhere in America by the European planters, …the springs are dried up or become less abundant.”  He noted how this allowed the soil to be washed away during heavy rains, causing erosion and a loss of fertile soil. He did not know that in the years that followed his visit, mankind would change the landscape and the climate even more by all the carbon emissions from the cars, airplanes, and factories that people have introduced all over the world.

Knowledge is a slow-growing plant, but Humboldt planted new ideas that have blossomed during the centuries since he started his explorations. In a recent book, Andrea Wulf, has explored Humboldt’s life and ideas in The Invention of Nature: Alexander von Humboldt’s New World. I highly recommend it to anyone interested in seeing how scientific ideas have developed over the years and how long it takes to persuade people to accept new knowledge and to change their ideas.

The recent five-year drought in California has brought home to me the conviction that we should all think about what we can do to prevent climate change from destroying our fragile planet. Droughts cause deserts to be formed and to expand. A warming ocean creeps up our shores and makes larger and larger areas unlivable. Violent storms eat away at cliffs destroying homes  and exposing communities to danger. The cliffs in the picture below are in Pacifica, California.

No matter what our leaders may tell us, all of us as citizens must look for ourselves and decide what we can do as individuals and communities to keep our planet safe for the future.