Utopia? Recently I discovered that they all have enough in common to share a space on the Internet in Utopian studies.

Five hundred years ago, Thomas More coined the term Utopia and used it to describe a fictional community that many readers saw as far better than the actual communities in which they lived. Ever since then, it seems, people have been searching for the ideal Utopia where healthy, happy people could live and flourish without the need for violence, war, and greed.

During the early 19th century, in both America and Europe, the search for the ideal community continued and led to the establishment of several Utopian societies including Brook Farm in Massachusetts and the Oneida colony in New York. At a time of crisis when the country was changing, many people were discontented with the ways things were going. Fulfilling lives seemed to be disappearing as the industrial society replaced the old rural, farming life Americans had been accustomed to. Isolated groups of people trying to forge a new society did not, however, find great success in changing the world. As years went by, the Utopian or “intentional” communities have mostly faded away, but perhaps technology has found a new way to bring together the dreamers, past and present, who hope for a better world.

Even Ronald Reagan, the idol of conservatives across the country believed that

technology would solve the world’s problems.  As reported in The Guardian (June 14, 1989) he announced “The Goliath of totalitarianism will be brought down by the David of the microchip.” It never quite worked that way though; Goliath has not quite disappeared in the almost 30 years since Reagan predicted its demise, but our world has certainly been changed by technology.

The Internet has made it possible for writers, readers and dreamers across the world to share ideas about how people have tried to change society in the past and what could happen in the future. This summer a conference, Solidarity and Utopia 2017 in Gdansk, Poland, brought together scholars from many different countries and disciplines to discuss the ways Utopian ideas have affected the world. There was a great deal to be learned.

I had never known that Lucy Maud Montgomery’s famous Anne of Green Gables became an important document in Poland during World War II. Polish soldiers were issued copies of a Montgomery novel to take to the front; later, it became part of a thriving black market trade for the Polish resistance.

As for my own heroine, Charlotte Edgerton, here is what one scholar discussed about her appearance in A Death in Utopia.

Intentional Community under the Magnifying Glass: Brook Farm in A Death in Utopia by Adele Fasick Elżbieta Perkowska–Gawlik (Maria Curie-Skłodowska University, Lublin) A Death in Utopia of 2014 by Adele M. Fasick is the first book in the Charlotte Edgerton mystery series. The eponymous utopia stands for The Brook Farm Institute of Agriculture and Education, a famous intentional community set up by George and Sophia Ripley in West Roxbury, Massachusetts, in 1841. But for economic solidarity and the solidarity of ideas, Brook Farm would have never come into existence. However, “all the grand plans for reforming the world” (Fasick 3) were very soon confronted by the practicalities of farming, in which most of the members lacked experience. Since the novel covers the span of time from September to November 1842, i.e. the second year of Ripley’s experiment, the spirits of many members appear to be high yet the looming financial crisis casts a shadow over the future of the whole enterprise. To make matters worse a Unitarian minister visiting the community is found dead on the premises of Brook Farm. Charlotte, one of the Brook Farmers, resolves to protect the good name of the community and find the culprit. In my presentation I will argue that Fasick’s idea of inscribing the fictional investigation of an amateur detective into the life of Brook Farm has proved to be successful as far as “magnifying” the issue of solidarity is concerned. However, Charlotte’s amateurish attempts to solve the criminal conundrum reveal more of the ideals and daily routines of the intentional community than of the tragic circumstances concerning the crime, a facet most probably intended by the author who has already explored the history of Brook Farm on a scholarly basis.

We may not have reached a Utopian society, but the possibilities are still worth discussion. And being able to talk about them on a worldwide network is the kind of Utopian dream that Thomas More and the Brook Farmers would have loved to celebrate. 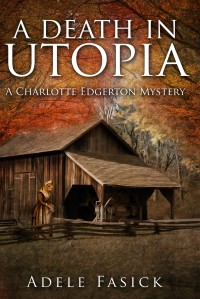 on Amazon.com Two years ago when I started working on the story of Charlotte Edgerton and her life at the Brook Farm Community in 19th century Massachusetts, I wasn’t at all sure that the book would ever see the light of day. Now at last is has!

The impetus that kickstarted my story was the wonderful NaNoWriMo month of November 2012. Those of you who have never heard of National Novel Writing Month may not know of this online meeting place for writers. For those of us who sign up for NaNoWriMo the month of November becomes one long writing workshop. The goal is to write 50,000 words in a month and to help the effort there are group forums, pep talks from successful writers, and general camaraderie along the way. If you’ve ever wanted to write a novel, it’s a great place to make your dreams come true.

Of course one month of heavy-duty writing does not produce a novel. After November ended there was rewriting, editing, sharing drafts with friends and family, finding a book cover artist, and all those other chores that take so much time. I enjoyed every minute of it—well almost every minute. As the story of Charlotte Edgerton and her adventures as an immigrant from England in 1842 built in my mind, it became more vivid and real. I have long admired the real life people who built Utopian communities like Brook Farm in the hopes of finding a truly fulfilling and democratic life for Americans. Imagining the story of what might have happened in that struggling community with so many idealistic, but sometimes impractical, dreamers has been a joy. Now the story is ready for others to read. You will find a few more details on my Death in Utopia page on this blog and the book itself is available on Amazon.com. I hope you take a look.

For the next several weeks I will be posting blogs about some of the historical figures who appear in A Death in Utopia. It’s a gallery of men and women you might want to meet.