Last weekend’s Fourth of July celebrations included many musical tributes to the United States and its history. One of the most familiar of these is the “Battle Hymn of the Republic”, a popular and honored patriotic song, but one that has had a long and contentious history. Most Americans will recognize these lyrics:

The author of these lyrics, the version that we usually hear at concerts, in schools and other public occasions, was Julia Ward Howe, one of the most notable poets of the 19th century. She was also an activist for the abolition of slavery and for women’s rights. Her inspiration to write these verses came during a visit to Washington DC in 1861, at the beginning of the Civil War. From her hotel window she heard Union soldiers singing a popular wartime song:

John Brown, of course, was the insurrectionist who had attacked federal property at Harper’s Ferry in 1859 hoping to lead a revolution that would end slavery. He failed in his mission and was executed, but he remained a hero to abolitionists and to Union soldiers during the Civil War. Julia Ward Howe wrote her new lyrics to make the song a more unifying and uplifting tribute to justice and freedom for the entire country to sing. Her version appeared in the Atlantic magazine and made her famous.

Howe’s lyrics for the song are the ones are still the most famous ones, but her version is only one of many variations. In 1915, half a century after the Civil War had ended, and five years after Julia Ward Howe’s death, a different set of lyrics were written for the familiar tune by Ralph Chaplin, a labor activist.  His song was composed for the Industrial Workers of the World (IWW), also known as the Wobblies. It soon became an anthem for a number of labor unions under the title “Solidarity Forever”.

It is we who plowed the prairies; built the cities where they trade;
Dug the mines and built the workshops, endless miles of railroad laid;
Now we stand outcast and starving midst the wonders we have made;
But the union makes us strong.

We don’t know what Julia Howe thought of radical labor unions like the IWW, but she probably would have enjoyed knowing that the tune she made famous has indeed gone marching on.

AN UNUSUAL OPPORTUNITY FOR YOU THIS MONTH:

One of the women who inspired Julia Ward Howe in her career was Margaret Fuller, the most famous female journalist and author in early 19th century America. The ebook version of my biography Margaret Fuller an Uncommon Woman is now on a special summer sale at Smashwords.com. The price is right—it is free! Just click on the website and order your copy. The sale ends on July 31. (If you prefer a print version of the book, you can find it at Amazon.com)

The events in Orlando this past week focused people’s minds and the media attention on the LGBT community as well as on terrorism. I am not going to write about that tragedy except to say that, like many others, my heart goes out to the friends and families of the victims. There is no excuse for the violence we have witnessed this week.

June is the month for LGBT celebrations across the country. In many cities and towns there have been and will be parades and demonstrations. Members of the LGBT community no longer have to hide their feelings or try to fit their relationships into an 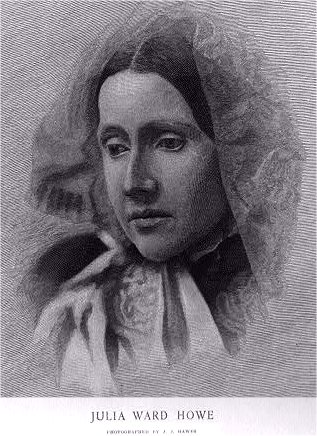 unyielding pattern of what used to be considered “normal” family life. And it has made me think of the ways in which women, who did not find happiness in the stereotypical marriages of the nineteenth and twentieth centuries, have tried to write and express their feelings.

Julia Ward Howe is remembered now only as the author of the “Battle Hymn of the Republic”, which became the most popular song of the Union forces during the Civil War. She was also a writer of popular poetry and articles as well as an activist for the abolition of slavery and for women’s rights. In many ways she lived the life of a traditional nineteenth century wife and mother, but behind that façade she struggled with her ambition to be a writer and artist. I have been reading Elaine Showalter’s fascinating and eye-opening biography The  Civil Wars of Julia Ward Howe (2016) and learned of an unfinished manuscript that was found among Howe’s papers many years after her death.

Howe’s untitled manuscript tells the story of a Laurence, a character who has both male and female characteristics. The story is tragic as both men and women are attracted to Laurence, but none can accept the ambiguous nature of his sexuality. It is easy to see why the book was never completed. It seems as though Julia Ward Howe, although unambiguously a female, was unable to accept and understand her need for an active intellectual public life—a life that was considered suitable only for men. Howe lived a more or less conventional 19th century life, but her marriage was very unhappy. She could not accept the limitations placed upon women, and could not devise a life that would combine domestic life with her creative needs.

Some 19th century women managed to build what appear to be happy lives for themselves by avoiding marriage and finding emotional satisfaction with another woman. Sarah Orne Jewett, whose well-wrought stories of New England life were popular throughout the

country, lived for many years with the widowed Annie Fields. This was one of the famous “Boston marriages” (a term coined by Henry James) in which two women established a household of their own. We probably will never know whether or not most of these relationships had a sexual component. It doesn’t really matter. The revolutionary part of the Boston marriages was just the fact that women could live satisfying lives without depending on men for either financial, emotional, or legal support. Of course, the women who pioneered these lives had to independent means, whether inherited or earned, to enable them to live this way.

ambitions with the limitations imposed by their gender. Willa Cather, whose novels were both popular and won critical acclaim including a Pulitzer Prize was one of the writers who found it difficult to accept a conventional female role. As an undergraduate she had sometimes used the name ‘William’ and cut her hair so short she was mistaken for a man. She wrote several of her stories from a masculine point of view and at times seemed scornful of other women writers. Most of her closest friendships were with women, but she never described herself as a lesbian and she protected her privacy so fiercely that critics and biographers still quarrel over whether or not she had sexual relations with women.

Looking back it’s hard to understand why it took so long for society to recognize the wide range of people’s gender identification and emotional lives. It wasn’t until late in the 20th century that the gay liberation movement began to be noticed and to gradually become acceptable to most Americans. And as it has grown, it has become more inclusive so that now we have gay, lesbian, bisexual, transgender people joining together to remind everyone of the great variety of human lives and emotions. We can finally see that the rigid rules that required all women and men to act in certain prescribed ways are unnecessary and hurtful. Young people growing up today are not required to hide their gender preferences the way earlier generations did.

There is still a long way to go before equality is achieved, but at least we can celebrate the long road that has been traveled already.